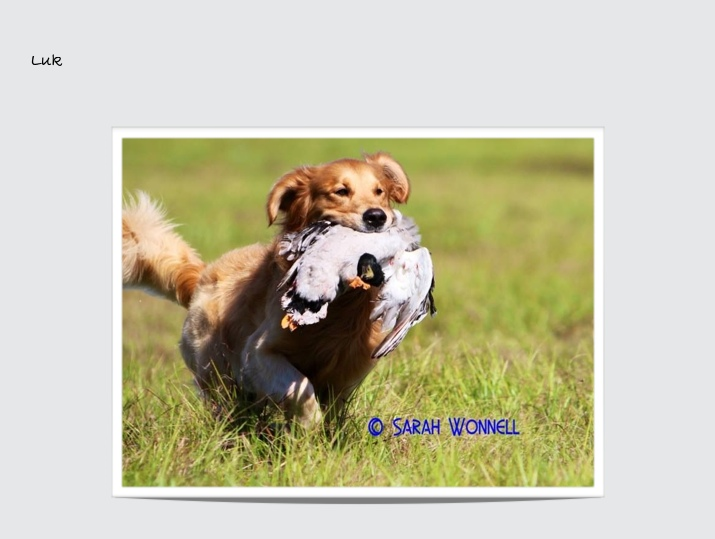 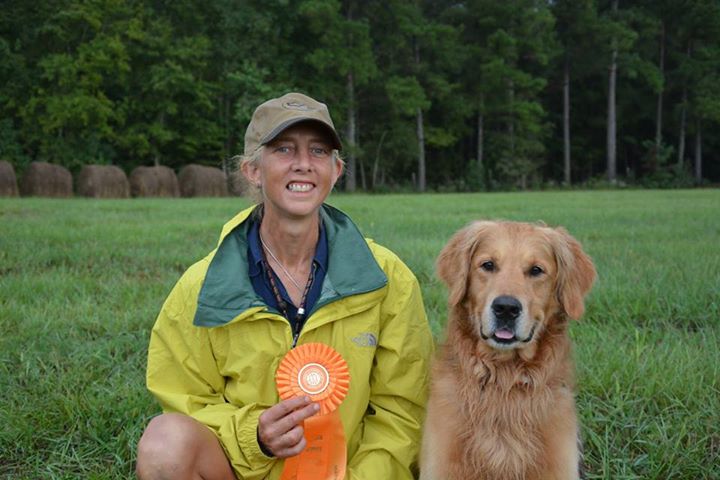 Luk was an outstanding representative
of the golden retriever breed.  He was a
dynamic working dog who brings intensity, focus and style to all activities he
tackled.  He was also a well-constructed
dog who reeks of power and athleticism.
He was a handsome dog whose beauty lied in his nobility and functionality,
along with his handsomeness.

Luk’s conformation strength was in his correct
angulation front and rear and wonderful pro-sternum and forechest.  He had
a solid topline with very nice reach and drive.   He was well balanced and light on
his feet.  He had good depth of chest and
good spring of rib with a short loin.
His topline was level and he carried his tail correctly.  He had a masculine head with a lot of
expression, a lovely, dark eye and brown-black pigment.  He had full dentition with a scissors bite.  Luk was medium gold in color with a correct,
wash and wear coat.  He was a dog of
moderate size and substance, standing 23 1/2” tall and weighed 70 pounds.

Luk was a joy to train because, simply put, he
loved to work.  He learned concepts very
quickly and generalized them well.  His
incredible focus to task, no matter what the distraction, maked training and
competing with him a joy.  In the field,
Luk was a hard-driving dog with excellent marking skills, memory, and strong
water courage.  He loved his birds.

Luk’s most outstanding attribute was his phenomenal
temperament.  He interacted well with
people and dogs of all ages and sexes.
He played regularly with bitches and dogs, puppies and veterans.  He was confident and calm when meeting intact
males and was comfortable sharing his tennis ball and living space with
them.  In fact, his self-confidence was a
trait that shined through in every venue.
His “on/off switch” made him always eager to work, while at the same
time a joy to live with.  He went to work
with his owner every day at a large horse farm and was a relaxed, trusted member
of the barn.

Luk passed away this fall from a rare disease that baffled several specialists.  Finally he was diagnosed with Canine Erythema Multiforme.  He passed away after a gallant battle with it, in spite of the wonderful efforts of his owners to help him fight it.  Such a big loss for Steph and Jay.

Both of Luk’s parents are outstanding producers, as
recognized by the GRCA.  Luk’s sire was CH Buckeye Standing Ovation OS,  a beautiful dog with a solid temperament.  Collin was a beautiful golden with an
impressive pedigree that combined some great show goldens. He was a solid, athletic Golden, weighing approximately
78 lbs. and standing 23.5″ tall.
Collin died after a brief episode of testicular cancer at 12 years of
age.

In her youth and right up until her death, she was a hard-driving,
high energy, very birdy retriever who absolutely loved the water.  She also excelled in agility.
Abbi produced Multiple High-in-Trial Can CH GMOTCH MH, a CT MACH HTHF MH50 UDX, six
MH’s, six MACH’s, an OTCH & several UDX/OM1’s, and several MX/MXJ’s, and many more multi-titled
offspring. Abbi died of kidney cancer at 12 years of age.

Luk is from a litter of eleven, several of which went to novice competition homes.  Today,
they are pursuing field, agility and obedience titles.  One sister has her Can CH-GMOTCH-MH, multiple HITs, and a 200 score. Another sister went from Nov A to her OTCH.  Another sister has her MACH CATCH4.  Two others completed their UDX.  Four JH and a SH.
One has a UKC Conformation Championship.
All eleven of the pups have performance titles, five with their CCA’s.  This is a tribute to the great owners and the biddability and great work ethic of this litter.

Luk had OFA Good hips, with PennHIP scores of
.42/.44, placing him in the 80th percentile. He has normal elbows,
heart, and eyes.  He is clear/normal for
Ichthyosis, GR_PRA1, and prcd PRA.  His DNA is on file with AKC.

He is available by frozen semen only.  Luk lived in southern Florida with his owner. 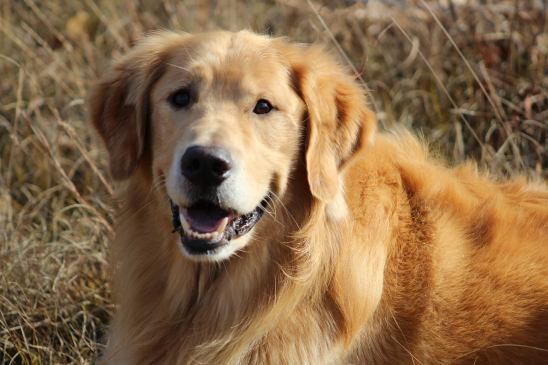 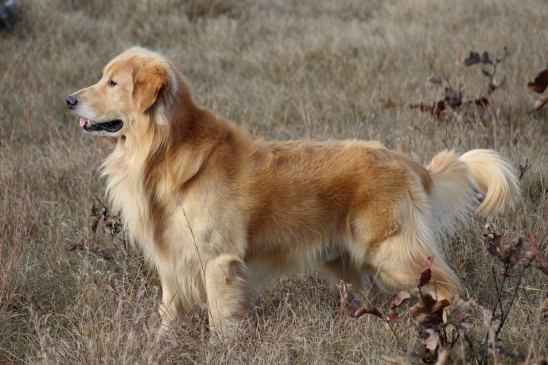 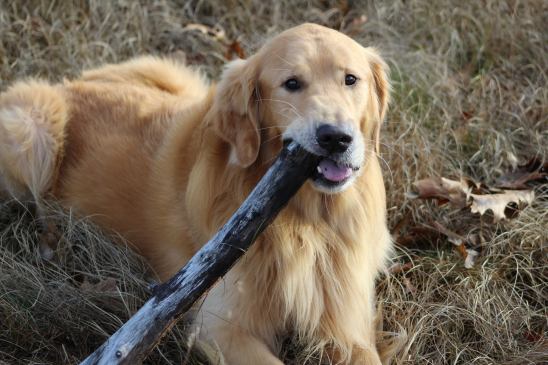 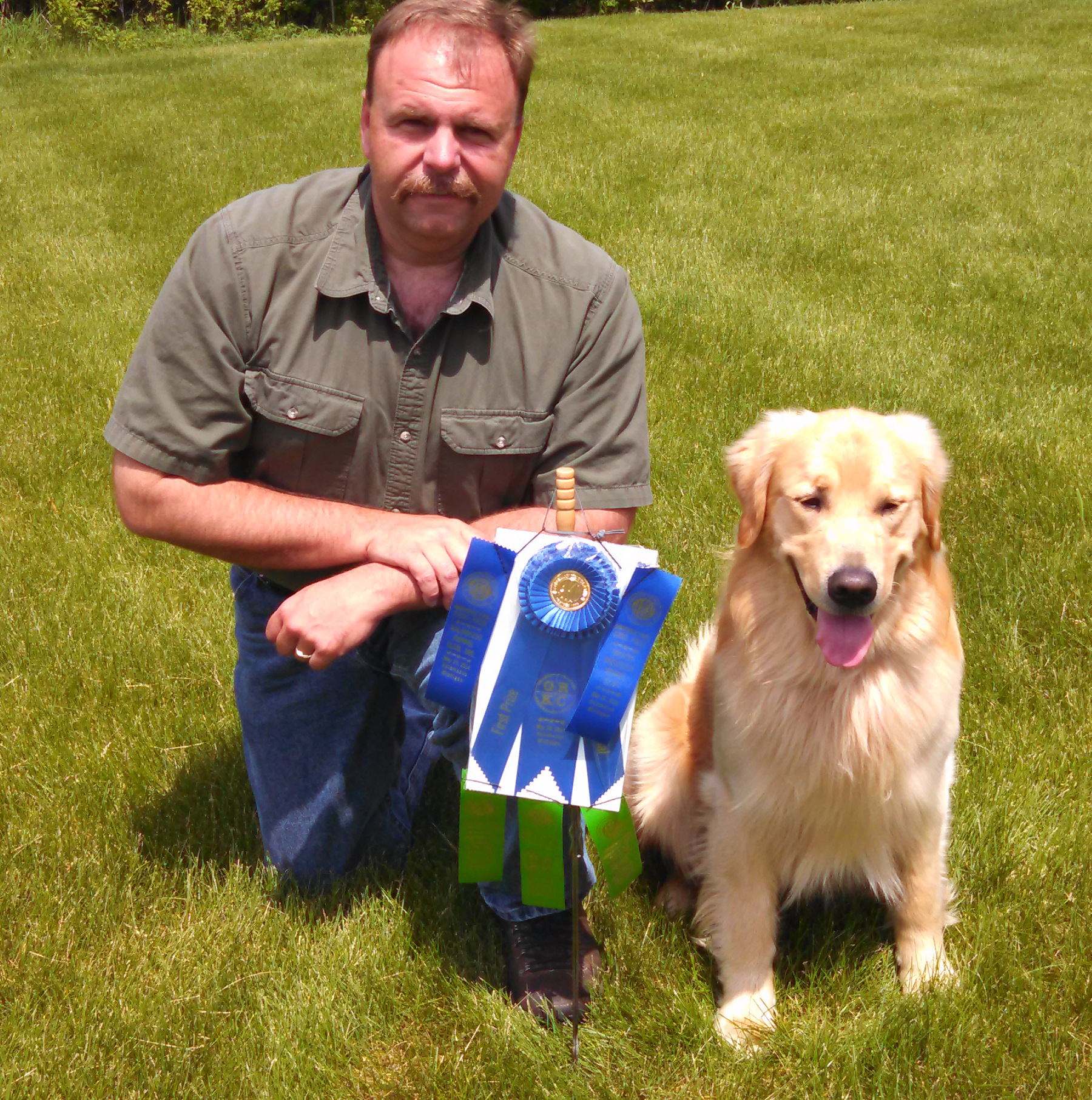 Max & Gordy finishing CD
Max is owned and loved by Gordon and Janelle Cole, Whitehall, Michigan.
AKC SR74495202      DOB:  July 31, 2012
Breeder:  Pat & Tom Swallows, Topmast Golden Retrievers
Sire:  Raggedy Run Time Well Wasted MH *** WCX CCA
Dam:  SHR Gaylan’s Wind Chime Melody CD BN RE OA OAJ NAP NJP JH WC VC CCA TDI CL1 PD1 PK2
Max is Gordy’s first competition dog.  He finished his CCA with his novice handler at only two years old on his first attempt.  He then went on to easily finish his CD. Max is an active hunting companion for Gordy, having gone out west and doing a great job bringing in the birds.
Max has correct angulation with a strong rear.  Good pro-sternum and forechest.  He has a solid topline with nice reach and drive.   He is well balanced and light on his feet.  He has good depth of chest and good spring of rib with a strong loin. Well muscled. His topline is level and he carries his tail correctly.  He has a gorgeous, very masculine head with a lot of expression, a lovely dark eye, and brown-black pigment.  He has full dentition with a scissors bite.  Max is medium-light gold in color with a correct wash-and-wear coat.  He is a dog of substantial size and substance and weighs a well muscled 80 pounds.
Max has a phenomenal temperament.  He interacts well with people and dogs of all ages and sexes.  He plays regularly with bitches, dogs, puppies, and veterans at day-care.  He is confident and calm when meeting intact males and is comfortable sharing his toys.  In fact, his self-confidence is a trait that shines through when you meet him.  His “on/off switch” makes him always eager to work, while at the same time a joy to live with.

Max’s sire was Raggedy Run Time Well Wasted MH*** WCX CCA, a great dog with a solid temperament. Kamikaze was a beautiful golden with an impressive pedigree that combined some great show and performance goldens. He could easily have played in the breed ring.  His owner chose to compete with him in the field, where he easily finished his MH and placed in field trials. He was also their personal hunting dog, picking up many birds in the fall. He was a solid, athletic Golden, weighing approximately 78 lbs. and standing 23.5″ tall.

Max’s dam was SHR Gaylan’s Wind Chime Melody CD BN RAE OA OAJ NAP NJP JH WC VC CCA TDI CL1 PD1 PK2.  Chime is our personal hunting dog, a birdy retriever who absolutely loved hunting.  She did well in agility, but a severe injury at three short-changed her agility career.  Her obedience career was only limited by her handler missing time with a new job. She loved to work each fall and winter picking up pheasants and ducks with us until she passed away at 15.

Max has OFA Good hips. He has normal elbows, heart, and eyes.  He is clear/normal for GR-PRA1 & 2, and prcd-PRA. He is a carrier for Ichthyosis.

He is available for live coverage or fresh-chilled. We have frozen stored on him also. Max lives in Michigan with his owner.

Max is at stud to approved bitches.