The Abbi and Collin puppies (The Traveling Litter) were born January  26, 2009. 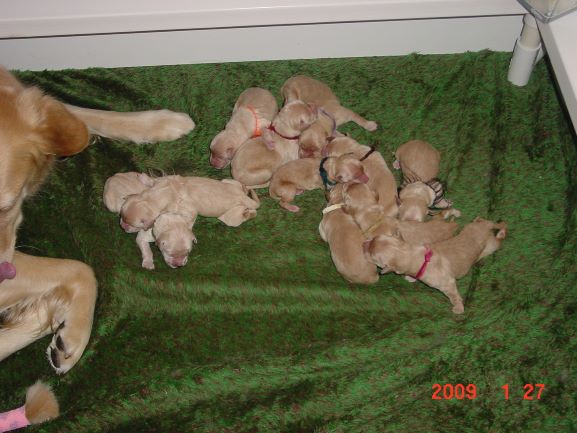 We had met Collin 4 years before breeding to him when we went on a stud hunting trip with Abbi’s breeder, Gayle and friend Marcy.  We love him just as much now as we did then.  He was a wonderful boy, and was very active right up to the end of his life from testicular cancer.  And he loved his bumper as much as ever!
The theme of the litter was the Traveling Litter.
We expected this breeding to produce intelligent, birdy retrievers with the drive and energy needed to excel at agility, obedience, and hunt tests, and they have not disappointed us.
We have two MH’s, four Junior Hunter titles, a Senior Hunter.
We have an OTCH/OBHF, a Canadian GMOTCH,
and a MACH/CATCH2, Six CD’s, four CDX, and four UD’s.
They are also good looking, with a Canadian CH, a UKC Ch and five with their CCA’s.
Just click on their names below to see the Traveling Litter’s own webpages for more pictures and updates on these pups.

This litter was raised here using Gaylan’s puppy rearing program and evaluated using their adaptation of Sheila Booth’s Positive Puppy Preview before going to their new homes around nine weeks of age.